I’ve always wanted to travel. It’s been a massive want since my independence. I’ve stared at images of foreign countries and their nature for years and dreamed of the day I would be seeing them with my own eyes. But I never really traveled my own country much either, so even when I’d so desperately want to get on a plane and head to wherever it would take me, it was daunting knowing I wouldn’t even know my way around Wales, let alone a foreign country.

Last year changed that. And music was the biggest reason for it. My first adventure started with Slam Dunk Midlands, and I traveled with friends a lot more confident than myself. So whilst I was nervous of getting lost in a place that seemed so far away from home, my nerves were put at ease knowing that the people around me could probably get us out of any sticky situations. It was an adventure in itself – getting to Birmingham, finding the venue, going around all the stages, thinking we could last the night at the afterparty and ultimately wandering the streets until our early morning bus. Practically falling asleep in McDonalds whilst getting stared out by old women was my lowest point, but nevertheless, it felt amazing that I was able to do that. I got to meet The King Blues frontman, Itch, too. It was the most surreal experience ever – I actually got to meet a hero of mine. 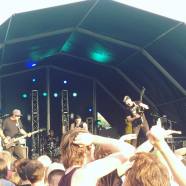 Then, not even a week later, I traveled to Germany for the Rock AM Ring festival. It was insane. Not only did I fly over, but I caught a bus and hoped for the best. Sure, I had people with me, but still. No one spoke a word of English, so we had to rely on trust. From Frankfurt airport and onto a random, completely desolate bus at 1a.m. we finally arrived in Koblenz, where the plan was to get a train. Obviously, after spending however long on the bus, (I was in and out of sleep,) trains were no longer running. So, into a taxi we went and just hoped he knew where we were meant to be going. We weren’t allowed to actually drive into the campsite so we needed to get out on the road and walk the rest of the way. So backpacks hoisted onto our shoulders, we made our descent in the pitch black. It was such a wonderful, nerve-wracking experience that it brought my love for adventures out even more.

This year, I get to indulge in my love for music and adventure even more. Starting with next week, actually. I’ll be seeing my teenage anthems played live by Taking Back Sunday in Manchester with Frank Iero and the Celebration as support. Then, in April, I’ll be once again heading to Bristol to see Real Friends, a band that has recently pulled on my heart strings. A few smaller gigs in between, such as tribute bands Green Haze, The Offspin and Paramore (or less) around Cardiff and then I’ll be heading to Austria for Nova Rock 2017.

Now, I’m not entirely sure if I’ve ever been vocal about my love for pop punk and metal on this blog before. But I’ll be seeing Green Day, System of a Down, Linkin Park, Rancid, Slayer, Good Charlotte, Pendulum and so so much more. The best part of it? Blink 182 are headlining. Blink one-eight-two. A band that’s been my favourite since I started getting listening and exploring my own musical tastes. A bonus is, a month later, they’ll be playing in Cardiff, where in the comfort of my own hometown, I can confidently be an emotional wreck and go mental to Feeling This live.

Side note, and a little soppy: none of this would be possible without my best friend and soul mate. A man that’s made all my dreams come true and makes my future far brighter than I thought it could be. (He gets up before the tickets go on sale while I’m busy snoozin’,) but with him and the friends that have previously adventured with me, I wouldn’t have this confidence and motivation to leave my comfort zone. I thank you all greatly!

With all these upcoming adventures and concerts I’ll be attending, I’ll be trying to keep this blog up-to-date with reviews, experiences and just all the good times I can possibly gather into one gallery. I hope you’ll share in these adventures with me~