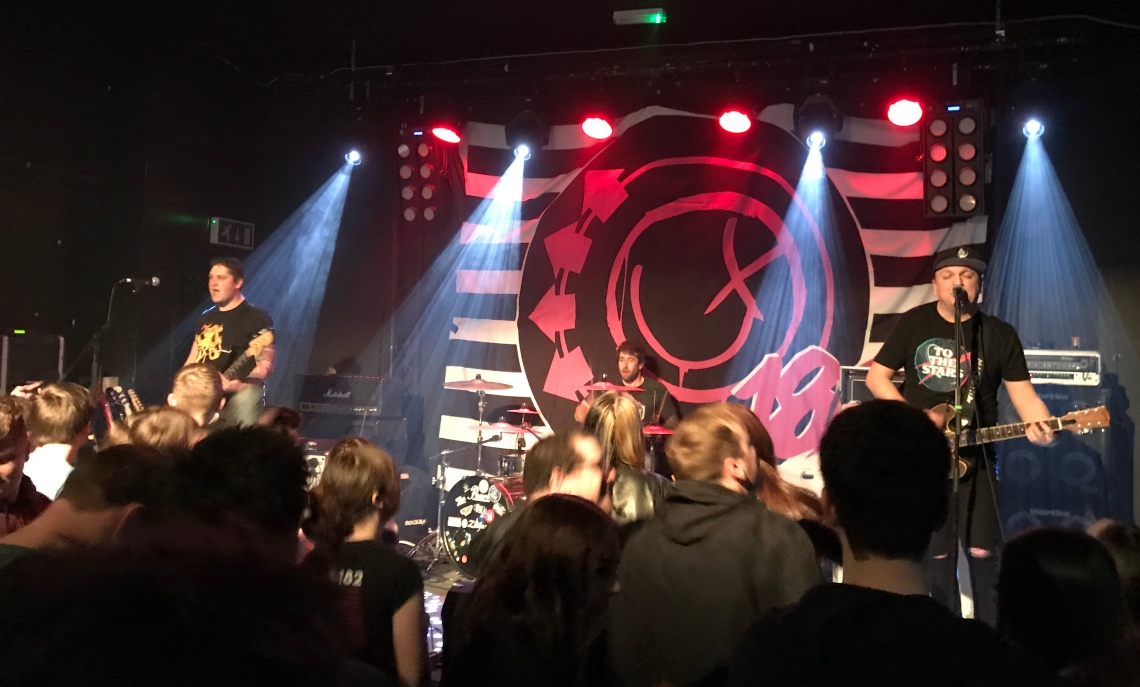 The queue is excited. Smiling faces across a wide range of people, all from different walks of life; people at different points in their lives waiting for the doors to open to dive bar and venue, The Globe. Excitement is a flurry, and the floor fills up pretty quick – and those at the age to drink are well and truly getting themselves started. The stage, illuminated by a huge custom-made Blink 182 flag, an epic show of dedication to what they’re representing with a black and white striped background, and the dripping smiley standing out in a fuschia pink – what’s that, a missing eye?

The tribute-trio look the part for most of it, with Fake Tom presented in To The Stars… merch rocking a Gibson ES-335 that’s probably the biggest piece of eye-candy on the stage, Fake Hoppus representing Hi My Name Is Mark and of course, equipped with a trusty Fender Strat bass, and well, Poundland Travis wearing a Saltrock tee but definitely well on his way with his arms covered in multiple eye-catching tattoos. The trio looks the part, equipment covered in Blink stickers and 182 spraypaints. The chords for ‘Feeling This’ kick in, and with a little help from the two pints, the flag with a missing eye becomes the flag you’ve been waiting to be stood in front of. The crowd is in full swing and ready for a night filled with the anthems of their teenage years, and what makes it even more incredible is the Mark, Tom and Travis Show-esque banter of sex and swear words the trio have become fluent in reminds us of the old-school Blink 182 when it was the original trio.

One thing to note is that Blink 182 find it difficult to sound like recorded Blink 182 live, but much like the real thing, the tribute-trio delivers the music with the same energy that causes a buzz of brilliant atmosphere with a merry crowd hungry for the music. ‘M+M’s’ is the perfect example, with the lyrics “there’s only so many ways I can make love to my hand” being the loudest to be sung back. And there are two ways to look at it, a) the band is doing brilliantly and people are well and truly into it or b) the crowd have some unaddressed issues lying around. While both are 100% possible, it’s exhibit A that’s the reason. Fake Travis is keeping up with 16-note beats, Fake Hoppus is showing off his energy and exploring the stage and Fake DeLonge has starry-eyes with every chord he’s pulling off. With red cheeks and sweat streaks on full display with the lights illuminating over the stage, the tribute-trio have already successfully delivered what they meant to – a night of Blink 182 anthems and a party-like atmosphere.

There’s a plethora of songs that bring the audience second-wind (or third.. or fourth) such as ‘What’s My Age Again?’ There’s almost an epic sound boost, and it’s hard to tell whether it’s intentional or the audience suddenly got louder but it’s received well. There are people from all age-groups here tonight, and I think they all definitely felt the nostalgia of their teenage years coming out. ‘I Miss You’ brings out the wailing of all the women from the room (including myself), and ‘First Date’ – which not only sounds amazing by the tribute-trio – but gets the whole floor up on their feet and jumping along with the heavy bass. One of the best songs though is ‘Stay Together For The Kids,’ and while everyone remembers all those times that they listened to that song during the worst of times in their younger years, it’s the song that Fake DeLonge really comes into his own as a musician. For a brief moment, he drops the Californian-DeLonge accent that he’s carried through each track up to this point and really shines. There’s a lot of passion there, and it’s obvious in the way he delivers the song as his own person than the parody he’s putting on.

There’s a lot of praise to be given to the tribute-trio, especially during tough-track ‘Carousel’ which is pulled off well and practically spot on. The trio definitely has a lot of love for what they do, and clearly put a lot of effort into their rehearsals and practices to have reached the level of skill they have to play Blink tracks they way they do. Covering practically the whole discography of the original Blink 182 – ‘Anthem Part Two,’ ‘Always’ (which of course went down a treat with the crowd) and ‘Going Away To College’ – the trio saves ‘Dammit’ for last with a little treat. A brief pop-punk version of TLC’s ‘No Scrubs,’ ending the set on such a high that gears the audience up for Green Haze. (Do I need to say who they’re a tribute for?)

One Eighty Two is delivering the tracks, banter and atmosphere that old-school Blink had, giving the audience and their fans a taste of what used to be and what we can still enjoy, even if they have different accents and different faces. Follow them on Instagram and keep up to date with the pop disaster shows where they’re heading to Frome, Chesterfield, Bridgend, Swindon and more.